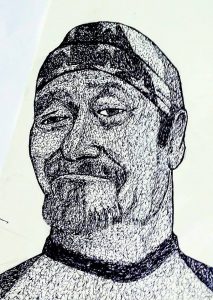 Robert Danny Allison was born in Summerville Georgia in January of 1959. His father was in the military and by the time Robert was 5 years old he’d lived in 4 states, finally settling in Southern California.

Always the new kid with new kid problems, making new friends, fighting new bullies etc., Robert spent a lot of time alone. He discovered hobbies, like building models and drawing. He used to go through the encyclopedia to find pictures to try to copy.

Fast forward to high school where an art teacher saw something special and attempted to nurture and challenge Robert’s skills. After High School, Robert enlisted in the Navy to be an illustrator/draftsman but ended up being a sonar tech chasing Soviet subs around the South China Sea.

Robert married in 1981 and the couple had two sons. After 20 years, the marriage ended in divorce. Separation from his sons effected Robert deeply. He lost his purpose and all he held dear and fell into a downward spiral. He lost his job and his hope and spent 3 years homeless. He developed a drug habit and began to shop lift just to get by. After several stints in jail he eventually did a term in state prison. Since his release he’s been on the straight and narrow.

One bright, sunny Southern California day while driving from Temecula to Moreno Valley, the skies darkened and a torrential downpour followed. Traffic had been moving at a good clip when suddenly all Robert could see ahead of him were red brake lights. Hoping to avoid a collision, he hit his brakes and steered to the right. Thinking he pulled it off, he heard a loud bump and the lights went out.

Robert awoke in the hospital with a fractured skull and a Traumatic Brain Injury. He jokes that he was pretty lucky. “All that seemed to be affected were my short term memory, my ability to concentrate, ability to deal with stress, body language, and situational interpretation is also a weak spot. Oh and I make odd noises here and there. Other than that I came out nearly normal,” he says.

Robert Danny Allison hopes to leave a mark on society and maybe even an inheritance for his boys, but his daily challenges have made that difficult at best. On all the days he’s thought about “throwing in the towel,” he remembers the lesson his father taught him long ago, “We’re Allisons. We don’t quit.”

NOTICE: Due to the COVID-19 pandemic, order shipments may be delayed. Rest assured we will do everything possible to rush your items out to you as soon as possible and will provide status emails to update you on the progress of your shipment. Thank you for your patience, and thank you in advance for your orders during this challenging time. We sincerely appreciate your business. KNAC Store Dismiss

You can find out more about which cookies we are using or switch them off in settings.

This website uses cookies so that we can provide you with the best user experience possible. Cookie information is stored in your browser and performs functions such as recognising you when you return to our website and helping our team to understand which sections of the website you find most interesting and useful.

Strictly Necessary Cookie should be enabled at all times so that we can save your preferences for cookie settings.

If you disable this cookie, we will not be able to save your preferences. This means that every time you visit this website you will need to enable or disable cookies again.